A Visit to the Turtle Conservancy

The Turtle Conservancy is one of those places that just seems beyond anything that should reasonably be expected to exist. 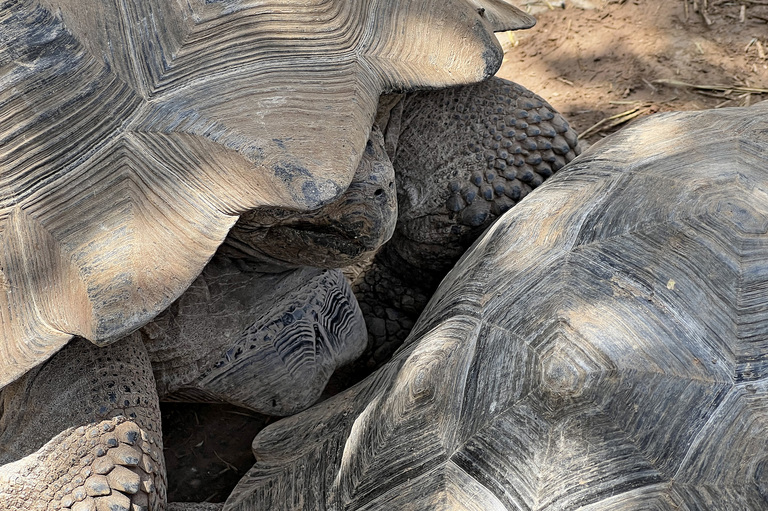 The Turtle Conservancy is one of those places that just seems beyond anything that should reasonably be expected to exist. To reach it, I drove east from coastal Santa Barbara, California, into the Topatopa mountains — to the Ojai Valley at the southern edge of the Los Padres National Forest, a pastoral splendor of vineyards, lavender fields, and olive groves along with an occasional high-end spa retreat, with the town of Ojai, 7,500 strong, as it’s focal point.

But I didn’t come for the lavender or the wine. I came to see the turtles.

I parked on the gravel near the gate and was greeted by Manci Rasmussen, the center’s education coordinator, who showed me around and gave an amazing personal tour of the facility and the many species of turtles and tortoises it keeps there.

The first thing you’ll notice is the grounds — a tastefully understated plant collection with an aura of careful maintenance that felt like it could be a classy resort, or a casual version of Huntington Library… but with turtles instead of art. Xeriscaping. Shade. Lots of agaves. Every greenhouse, every turtle enclosure, every pond, every trail, feels like it is designed in the service of beauty while remaining true to its purpose.

After we walked around and visited numerous tortoise enclosures and outbuildings, Manci and I sat on a large boulder at the edge of the giant tortoise enclosure to chat in the shade. She told me that her first week working at the conservancy coincided with the arrival of a new female Aldabra tortoise. “The poor thing might have been abused — it tried to escape, and went into a corner,” she said. Manci loves giant tortoises anyway, and she began to take her lunch there every day, the two newcomers eating together, until they became pals.

One of the challenges in caring for these tortoises is that they will eat as much food as you give them. In the wild food is much harder to come by and nature keeps them slim. But in captivity, food is plentiful and they can grow fat. This is not a good thing.

Right now it was the Galapagos tortoises who were putting on weight, so the Aldabras were moved off to a different enclosure and the Galapagos tortoises put on a strict diet… for two months. Manci brought over a few long sticks of celery for me to offer the tortoises, and immediately two hungry female Galapagos tortoises headed our way. “Celery has no more calories for tortoises than it does for people,” she said. Makes sense to me. I didn’t let my fingers get too close to their munching mouths.

Of the many wonderful turtles and tortoises I met at the Turtle Conservancy, I was most awed by the celebrity ploughshare tortoise. Manci said he’s probably the most photographed ploughshare in the world. He certainly acted the part of a professional model, holding his pose but lifting a foot off the ground to give the impression of motion. His smug don’t-give-a-shit expression capped the look.

After saying goodbye to Manci, I returned to town to utilize the local library’s excellent wifi. I had also heard about a local Burmese eatery, The Dutchess. I will never pass up a chance at the classic Burmese tea leaf salad, and theirs was a fresh twist on the familiar melange of lettuce, fermented tea leaves, cabbage, tomatoes, and peanuts tossed, with garlic undertones, all with a secret spicy sauce.

The Turtle Conservancy does amazing work not only here but in other parts of the world, working to protect and save turtles and tortoises, as well as breeding them here in Ojai to help establish assurance colonies as well as releasing back into the wild to help ensure the future of their species.

The Tortoises of Coachella Valley

On the Island of Saint Helena