The Tortoises of Coachella Valley

A tortoise count is happening in the Coachella Valley— and I’m tagging along. 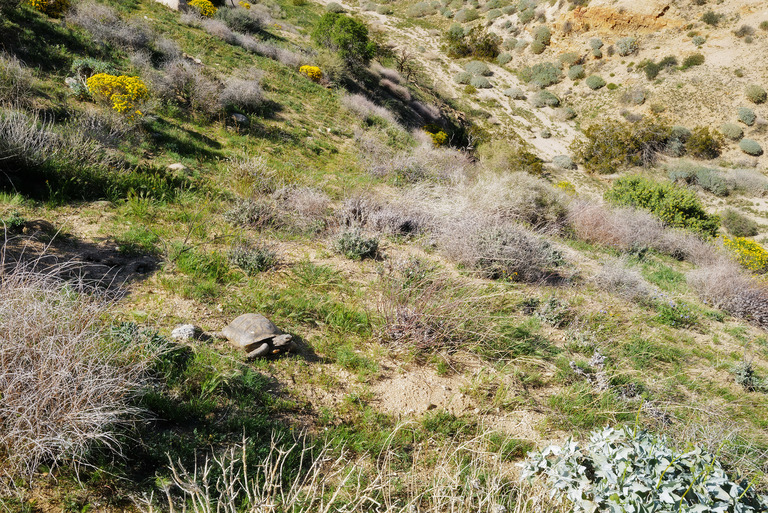 A site that especially intrigues me is known as “Mesa” that’s not too far from the Sand to Snow National Monument, near the western end of the valley choked by two of the “saints”: Mounts San Gorgonio and San Jacinto. This is where all the windmills are.

We are technically beyond the pale of the Mojave desert proper, which ends in the Little San Bernardino mountains. We’re in a transitional zone between it and the Sonoran Desert, a subdivision that some call the Colorado Desert. Gopherus agassizii, regarded by many as a creature of the Mojave, inhabits this transition zone. In nature, boundaries can sometimes be blurry. The San Andreas fault runs underfoot. Most people probably just think of this as the Palm Springs windmills.

The tortoises here are not like the tortoises of America’s other deserts. G. agassizii has evolved to survive this harshest of all environments, and its distinction as a unique species — and an endangered one at that— is the outcome the Mojave’s distinct patterns of rainfall, vegetation, geology and pre-history. It’s this tortoises adaptations, driven by this specific environment, that make it different from other tortoises species that may look similar but inhabit adjacent deserts and have followed their own paths of evolution there.

From our surveys of five different locations, we’ve found three previously-captured and marked adult tortoises on two sites, two empty and sun-bleached shells of dead tortoises, and one sub-adult tortoise that has never been recorded. We’ve added him/her to the record books.

At one point I walked a little too close to a cholla cactus, which I only realized too late when I felt a sting on my right thigh. I let out a yelp, and stopped. A fur of spines had pierced three layers of fabric and jabbed into my skin. Jeff saw this as an opportunity to draw my attention to the wondrous engineering of these spines. “Look, the spines have a kind of sheath on them,” he told me. He reached out to the same cactus and yanked out what looked to me like a straw, a kind of tube, that held the spine. Apparently, this sheath helps make the silver cholla less-bad than the really ornery teddy bear cholla. The lesson ended, and it was clear that these spines were not going to remove themselves. I pulled all the spines I could out of my jeans. Then I asked for a moment of privacy so I could drop my pants and inspect the damage. The longest four spines had latched onto my right thigh, held in by a nasty hook at the end.

Each came out with a slight tug. A sting, and a small trickle of blood. My pride might also have been slightly wounded.

But I was free.

A Visit to the Turtle Conservancy