Eagle-eye View of a Solar Farm

Desert Sunlight Solar Project was one of the first significant installations in the Mojave. I decided to get a fresh perspective on it, from the air. 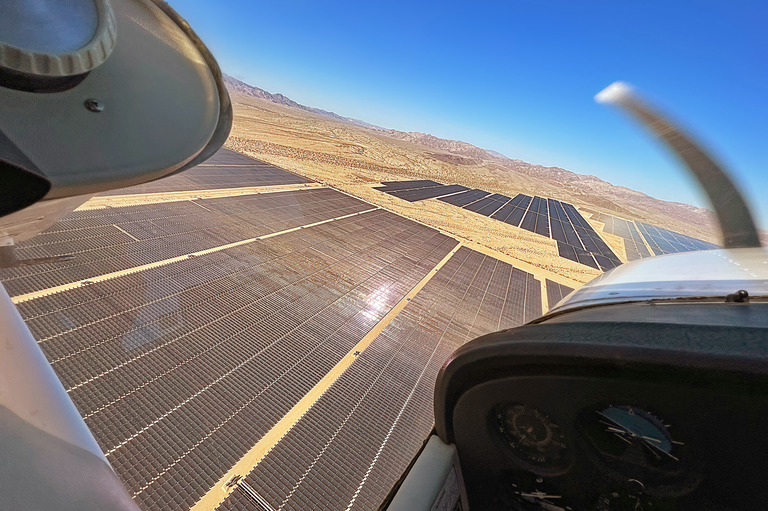 I was curious about the Desert Sunlight Solar Project because I’d heard so much about it. I was in the Coachella Valley anyway, spending a couple of days with some biologists in the field, so I decided to take this chance to get some fresh perspective on the matter. The solar project sits on federal land, Bureau of Land Management land, which belongs to the general public. Anybody who lives in the area, and has an ATV, knows you can go on that land and ride to your heart’s content. You can camp almost anywhere you like. You can pick up rocks and stuff, and bring them home.

But there are some places you cannot go, and the solar project is one of them. It’s been carved out from open use under a long-term lease from the BLM. The leased property is fenced, and you cannot go in without permission. But, you can go above it! The air space is open. So I chartered a small plane to fly over for a closer look.

It took us a little less than half an hour to get over there from the airport in Coachella Valley. I asked the pilot to do a couple of loops, while tipping the plane so I could get a good gander at it. When people told me “Oh, it’s one of the largest in the world,” or, “It’s six square miles,” I had no idea what that meant.

Well, at an altitude of 3,000 what hits square between the eyes is that it’s fucking ginormous.

“Can we measure it,” I asked my pilot? Turns out, he’s got something like an odometer. It’s how he knows what to bill me for this flight. So he measured the distance while I kept my eye on the stopwatch. Flying from southeast to northwest, corner-to-corner, it clocked in at 6 miles, and took us 3 minutes and 23 seconds. It felt like forever, and — this was my imagination working overtime — it felt like the black beetle solar panels were spreading to the horizon, as far as the eye could see.

Not content with just the aerial perspective, later that afternoon I drove over to see how close I could get to the panels themselves. My expert sources told me that the land surrounding the leased area is also open to the public. You can walk right up to their fence. It’s probably best to play it safe and not to stick your hands over the fence when taking pictures.

Once I pulled off the Interstate, I turned to my iPhone for help figuring out where to go. The satellite view helped me make out the perimeter, and it looked like there might be a dirt road going along the back that I could try. Once I got to the fence, the welcome was pretty much like I imagined: “Keep Out” a bunch of shouty signs tied to the chain-link fence told me. A string of barbed-wire guarded the top of the fence. Inside, the land had been leveled and scraped, covered with gravel, and there was no sign of life whatsoever. I had been told that they spray the ground with some kind of plant-killer, and from the look of things that’s exactly what was happening. And because the unrooted earth out here turns to dust, this creates another problem. I’m guessing they spray it with calcium chloride or magnesium chloride to keep the dust down.

I looked around, and I was standing in a creosote forest. The drought has really worked this land over, and the trees are blackened and defeated. It wasn’t much to look at right now. But still, on my side of the fence there was life. On the other side, nothing. No plants. No animals. No insects.

I’ve been thinking about the ecological consequences of these solar projects, and how the desert out here is portrayed as basically waterless and lifeless, and the only good use is so-called “green energy.” But it’s springtime here right now, and in a good year this joint is going to be pulsating, hopping with life. Bighorn sheep. Jackrabbits. Tortoises, of course. And a rainbow wonderland of wildflowers and plants, going bonkers with life, making the most of the six or so weeks they’ve got to fatten up or complete their lifecycles before summer hits.