Lonesome George’s time on earth ended before I ever got to meet him. 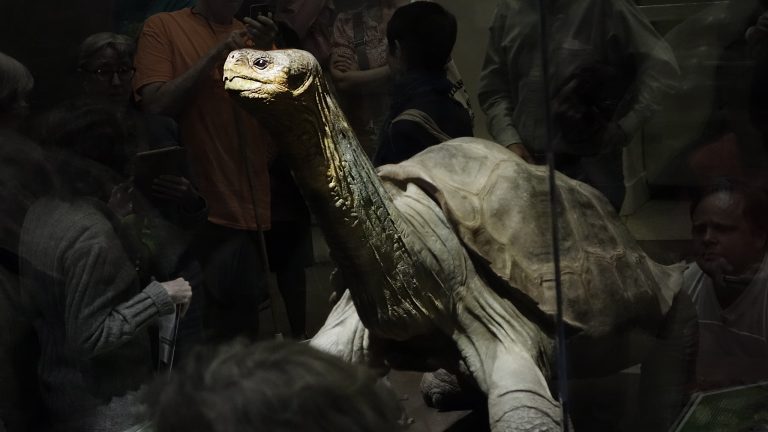 A Night at the American Museum of Natural History

Lonesome George’s time on earth ended before I ever got to meet him. George had passed away the year before our visit to the Galapagos Islands. He spent some time on ice, then made a long journey to New York for a year-long restoration.

We caught up with him at the American Museum of Natural History — at his Grand Debut in the glass box where he begins eternity.

This is what I love about living in New York: Something fascinating is always a stone’s throw away.

But before setting eyes on this triumph of taxidermy, we got to hear the backstory from an all-star panel: Johannah Barry, president of Galapagos Conservancy; Linda Cayot, science advisor who has devoted her life and career to understanding and preserving the Galapagos; James Gibbs of the SUNY College of Environmental Science and Forestry; and Arturo Izurieta, Galapagos National Park director. Panel moderator was the AMNH’s Eleanor Sterling. These people are legends — true originals!

When Lonesome George died, it was in his sleep just over two years ago. His death caught his caretakers and the scientific community by surprise, and it triggered a tsunami of activity.

“The shock and sadness was absolutely palpable,” said Barry. “People were crying in the streets. Fausto Llerena [George’s caretaker] had on a black armband. How quickly the world knew about it! The entire world community — many institutions — came together to help us plan the next steps.”

Linda Cayot felt gut-punched. She had run the tortoise center for a decade. “The thing that hit me the most… every time I opened my mouth to talk about George dying, I started crying. There was something else in the relationship that surprised me. It was the tortoise, but also the species, but also the Galápagos and years of work and always back to him“

The first step was to stabilize and preserve his remains. After deep-freezing him, a collective decision was made that the best way to honor him and his memory was to ship George to the American Museum of Natural History to meet a world-class taxidermist.

This was no small undertaking. George would be relocated 3,000 miles to New York in pristine condition, over a multi-segment flight. A crate had to be built. He would need to perfectly packed. He needed to remain frozen, so a backup freezer had to be ready at the layover point. And handled gently at every step along the way.

In the pre-dawn stillness of Santa Cruz on Isabela island, Gibbs and his team met to load Lonesome George into his box. For insulation the team had chosen pink fiberglass — schlepped over in suitcases by volunteers who happened to be coming in for a separate conference.

After packing him up, “basically the box was addressed to the Museum of Natural History, and marked ‘fragile’,” said Barry.

Because of Lonesome George’s celebrity status, the team didn’t want to draw too much attention to his crate. “We wanted to get him safely to New York,” said Gibbs. “But when we told people what was in that 500-lb box, people would touch it — they would cry. This was just getting him to the airport. It was quite touching.”

Gibbs escorted the crate all the way to New York, and when it was opened Lonesome George’s shell was still stippled with frost. Success! George would spend the next year in a taxidermy studio, getting the makeover of a lifetime. (This is another story for a separate post.)

The panel’s purpose, however, was to focus on what the tortoise taught us, more than just the tortoise himself. It was fitting. Even in life, that was the bigger theme of Lonesome George, writ large on a plaque overlooking his old corral in Santa Cruz: “We promise to tell your story and to share your conservation message.”

If George brought people together in life, this was even more true in death.

In life he represented hope. But Lonesome George’s death proclaimed to the world that another species had gone extinct. In death he became an ambassador for the bigger issues — making them relatable. He became a face of conservation.

Izurieta said, “He’s a partner and a friend, promoting these sort of discussions and deep thinking about nature and science, and making the species survive combined with the stability of ecosystems.”

“One of the things I think that’s shifted in conservation thinking is spending a lot of time saving a single species,” vs “spending more time and resources considering the entire ecosystem and the ecosystem processes,” said Barry. “When you start thinking larger, you possibly see the problems crop up earlier than if you focus on one individual.”

Gibb‘s take is that “We need to be focused on de-extinctions, but at the population level and not bringing mammoths back to the Adirondacks.”

Cayot urged, “There are a lot of species out there — Galápagos and elsewhere in the world — where there’s still a population you can work with. That’s where we’ve got to be working.”

Lonesome George is on view in NYC’s American Museum of Natural History in the 4th floor Astor Turret from Sept. 19, 2014, to Jan. 4, 2015. On your way over to pay your respects, slow down as you pass through the Fossils Hall and say hi to the Titanosaur. The museum is full of wonders!

Hermes & Mud at the AMNH