Aldabra atoll is many things: It’s the second largest atoll in the world, a UNESCO World Heritage Site, and home to many endemic plants and animals including more than 100,000 giant tortoises. Two biologists share their experiences. 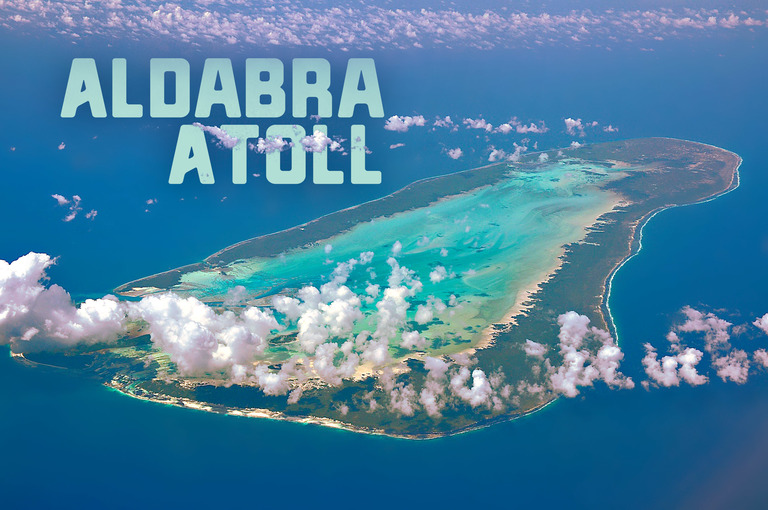 The Indian Ocean, you’ve heard of. The Seychelles Islands, probably. But Aldabra Atoll? Aldabra is many things: It’s the second largest atoll in the world, a UNESCO World Heritage Site, and home to many endemic plants and animals including more than 100,000 giant tortoises (Aldabrachelys gigantea).

Human presence is limited here — around 15 people live her year-round, maybe twice that in the busy season. A pair of biologists have written about their experiences there for Africa Geographic. It’s a wonderful portrait of one of the most remote places on Earth. Aldabra is a discontiguous ring. The atoll is broken into four main segments named Grande Terre, Malabar, Picard, and Polymnie, surrounding a lagoon large enough to fit the island of Manhattan.

“The shallow waters and fringing mangrove forests are a haven for wildlife. Hawksbill and green turtles cruise here in their hundreds threatened only by tiger sharks up to five metres in length; seabirds and waders abound. Aldabra is also home to globally significant populations of crab plovers, red-footed boobies, and possibly the world’s largest frigatebird population; it is one of only two oceanic breeding areas for flamingos, and the blue-eyed Aldabra sacred ibis … is found only here.”

Aldabra has faced many depredations and threats by man, including massive tortoise and sea turtle overharvesting, the arrival of invasive species, and plans for a military base. The authors tell us that it has survived all this to become… or is still becoming… Eden restored. Yet threats remain: rising oceans, and ocean-borne plastics.

Aldabra is a singular place with an endemic species of tortoise. Its full story hasn’t been told. First-hand reporting from the front lines of tortoise conservation is an essential component of The Tortoise Project. I hope to bring to life the once and future world of these incredibly wonderful creatures.

Melville in the Galapagos